The Myzone MZ-20 Smart Scales feature in Stuff’s “Most Wanted” gadgets of the month. The caption reads: “I’ve become obsessed with an activity tracker called Myzone that scores you on effort” and goes on to describe its smart features. 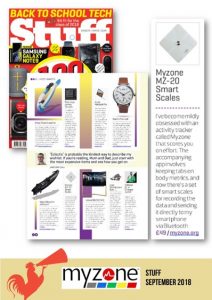 Stuff is the world’s best-selling gadget magazine, that's published in over 25 countries. It’s where you can find tech news that’s wry but not dry, the world’s most trusted gadget tests and exclusive previews of the latest phones, computers, wearables, tablets, games, apps, TVs, hi-fi, headphones, cameras, consoles, and media players, as well as insights into the technology that's changing your future.

Selling Exercise so Clients Want to Buy It: Part II

In Part I of this two-part blog post, we shared current research from affective and behavioral science suggesting that some of the traditional methods of selling ...

Want to work harder in the gym? Make it competitive

On Saturday, MyZone was mentioned in the national broadsheet newspaper’s ‘Body and Mind’ feature. After working with “a number of national gym chains”, Myzone’s function is briefly ...