In Metro’s “The Lust List”, the Myzone sports bra is featured in eye-catching red. It is described as “a bra smarter than your average undergarment”. Myzone’s “app and gamification-led heart-rate-tracking activity belt plays nice with its dedicated sports bra to provide support and motivation where it matters”. 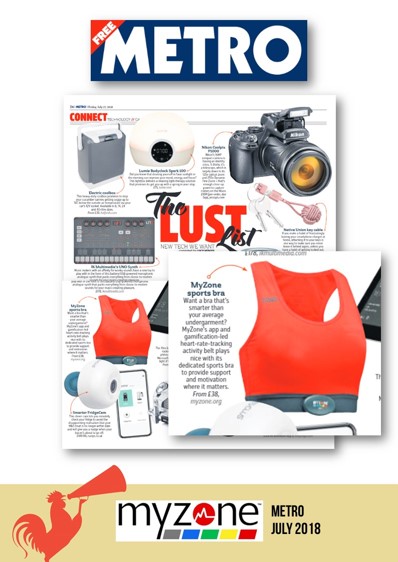 Every weekday morning some 1.3 million copies are distributed across the UK making Metro the world’s largest free newspaper and the third biggest newspaper in the UK. Metro is a perfect mix of national and international news wrapped around local information – entertainment previews, listings, weather and travel. Metro’s news stories are tightly written, so that the reader can take in all the key facts quickly.

All the best fitness gifts, gear and gadgets for the gym-goer in your life

The striking MZ-3 tracker is featured in Marie Claire’s Christmas Gift Guide, perfect for finding out “if you are in the peak zone, the cardio zone, the aerobic zone or the fat burning ...

Obtaining a healthy lifestyle in the new year requires listening to, and respecting your body. Overworking yourself, especially when you feel that you should stop, ...