MYZONE has given a woman a new zest for life after helping her to lose almost 52lbs.

Forty two year old Lorraine Ripley from Darlington had not exercised since the birth of her daughter 11 years ago.

“Prior to becoming a mum I was active, but after having my daughter I lost interest in exercise and didn’t shift any of the weight I gained during pregnancy at all. I gave up smoking up nine years ago and the weight piled on even more,” says Lorraine.

Working as an administrator for Bannatyne’s Health Club in Darlington, Lorraine spends longs periods of time sitting at a desk, which only exacerbates the problem. Following the introduction of MYZONE to the health club, Lorraine took the plunge in September 2015 and started exercising using the heart rate and fitness tracking technology. 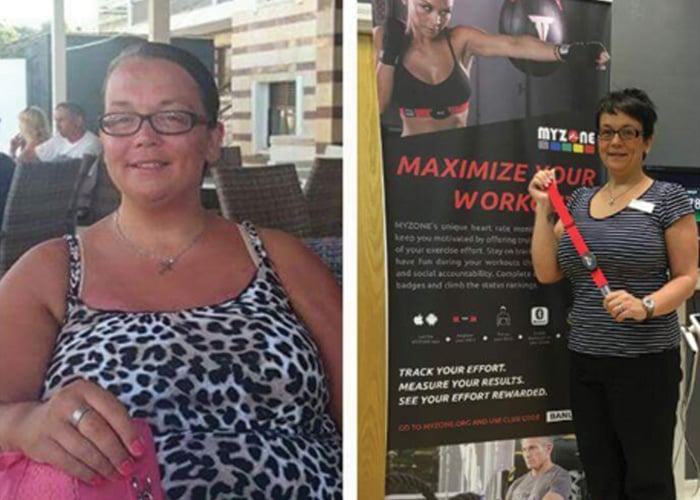 “In all honesty, I wasn't overly keen on using MYZONE. I was very overweight and conscious of how I looked, but I knew I needed to start somewhere, so I bit the bullet and had a go,” she says.

Starting out on the cross trainer in the gym, Lorraine progressed to taking part in classes such as Sh'Bam and Body Attack, which has now become her favorite class. Working with MYZONE has helped transform the way Lorraine feels about exercise and, most importantly, about herself.

“I never used to like the gym and I didn’t feel like I fitted in to the classes, all because of my weight. But  using MYZONE and getting fitter gave me the confidence to do more.  Seeing the monitor showing my heart rate, gives me the extra push I need – it’s like having your own personal trainer.”

From no exercise at all, Lorraine now averages three sessions a week which include gym work, classes and the odd run outside.

“MYZONE has given me a new lease of life. I’m a much more confident person now. I’m fitter, more active and have so much more energy. I love the fact that I can run up a flight of stairs without getting out of breath,” she says.

This September, Lorraine is taking on one of her biggest challenges yet by taking part in the Great North Run, the world’s largest half marathon.

“I actually don’t like running, so this will be a huge challenge, but with my rising fitness levels I believe I can do it. I can’t wait to see my MEPs that day.”