Wigan Warriors switch it up with Myzone partnership

Myzone is proud to announce its partnership with Wigan Warriors as the rugby club’s official heart rate monitor supplier. In addition to the players using the MZ-Switch for performance tracking, game days and recovery sessions, the club is also running a movement campaign across its community, empowering more people to fall in love with exercise and sport. 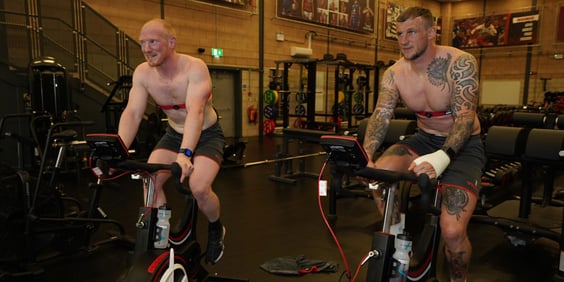 Making a difference with legends of rugby.

“With an element of serendipity, Jason introduced us to the Wigan Warriors team and it made sense that we partner together for this special opportunity to really make a difference in both team performance and in the greater community.”

Providing belts for all first team players and all playing squads, the MZ-Switch heart rate monitor and Myzone equipment will gamify players’ training on pre-game days and in recovery sessions.

In addition to the competitive benefits, the Community Foundation is also running a campaign within the community where everyone that reaches the World Health Organization’s guidelines for physical activity – 1300 MEPs in a month – gets a free heart rate monitor at the end of the campaign.

Improvements both off and on the field.

“Myzone is delighted to be partnering with the most successful British rugby league team in history, to support their players’ performance, and engage the wider Wigan community to increase levels of physical activity,” explains Jonathan Monks, Myzone director of EMEA.

The MZ-Switch being used is the world's first interchangeable heart rate monitor for the gym, outdoors or in water. Integrated into the club’s Community Foundation projects along with fan engagement initiatives, Myzone’s ethos of making movement more fun for more people will be embraced to encourage physical activity and wellbeing inside and out of the training ground.

Wigan Warriors head of performance, Ian Bentley, commented: “We are delighted to incorporate Myzone’s innovative products into our High-Performance programme.

“As a club, we are always striving for improvements both off and on the field, and this technology will allow us to accurately understand player exertion levels and amend sessions accordingly.

“Our players are a competitive group so have already found the group heart rate display to be a great addition to the first team gym, where they’ve been able to monitor performance in real-time and challenge each other.”

For more information check out the MZ-Switch in the shop or the Wigan Warriors website.

We are excited to announce we will continue to support the physical activity community by offering free live gym classes ...

Set yourself up for the day. Set a good example for the ones you love. Set your heart on achievement, together. Myzone is ...